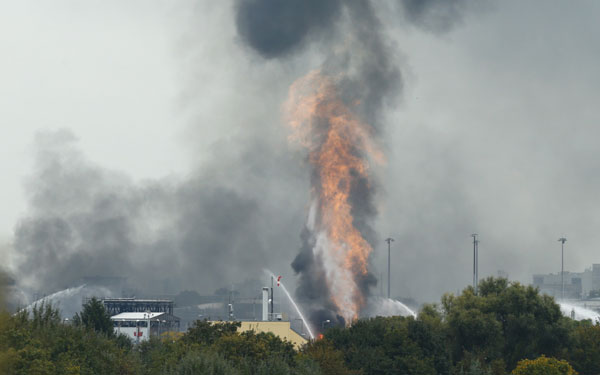 Fire and smoke rise from the factory of chemicals giant BASF in Ludwigshafen, Germany where several people had been injured following an explosion, October 17, 2016
LUDWIGSHAFEN -- An explosion at a facility of German chemical company BASF in Ludwigshafen, Germany on Monday killed two people, seriously injured six others and left two more missing, the company said.
Measurements done in the air and ground did not show any increase in levels of toxic substances, said the German chemical giant.
All the roads leading to the Gate 15, the northern entrance into the plant, which is not far from where the explosion occurred, remain blocked and are guarded by police officers. Meanwhile, the fire off the south side of Rhein River can still be seen.
The firefighting continues as the fire will be burned out under controlled conditions, according to the company.
BASF said it has stopped its central production facilities. The so-called steam cracker had been turned off for safety reasons.
The explosion took place around 11:30 a.m. (0930 GMT) while work was being carried out on a pipeline route, with which preliminary products of ships were transported to actual production sites. The blast resulted in a fire. However, the exact cause remains unknown as investigation is still underway.